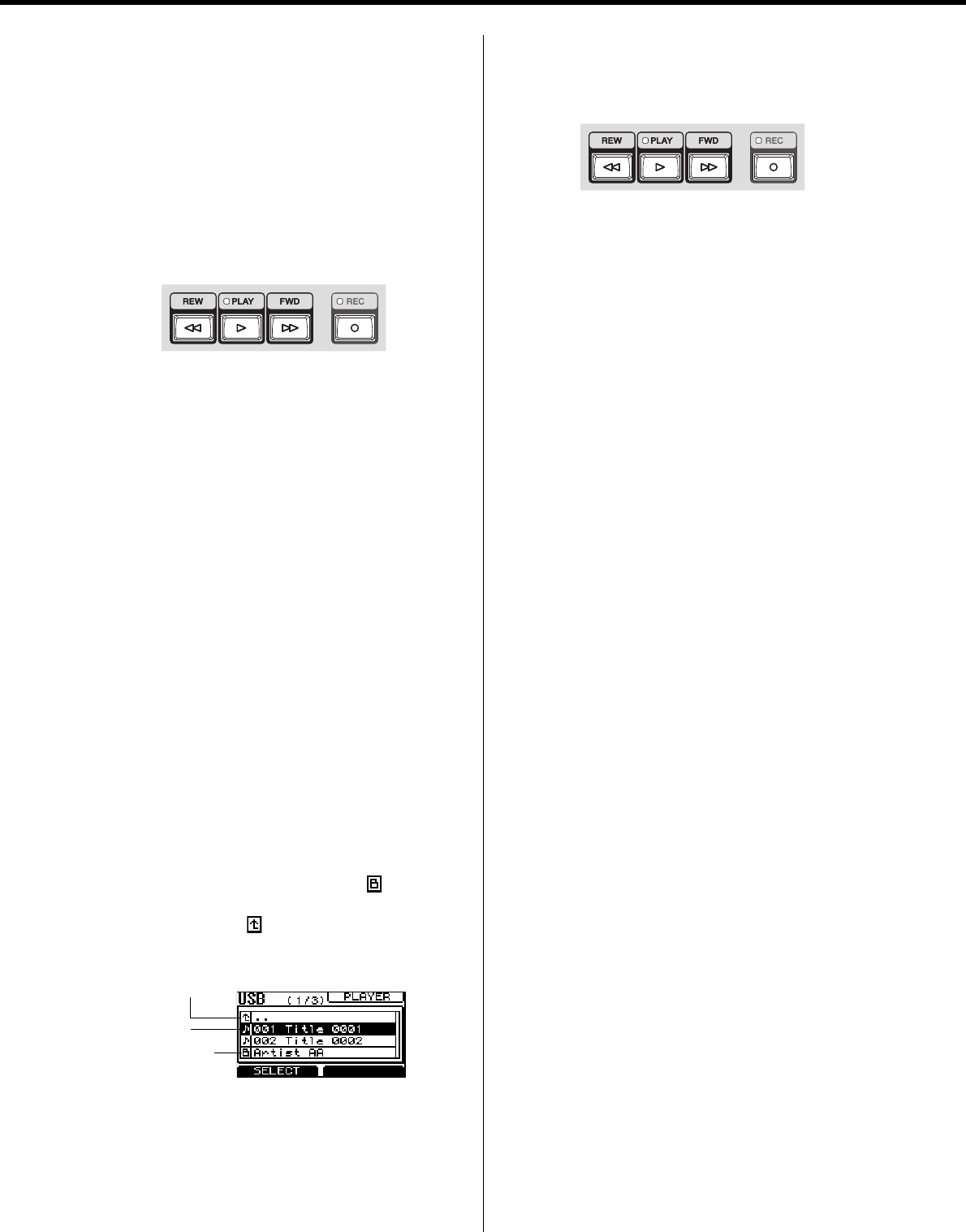 MGP32X/MGP24X Owner’s Manual
35
Recording/Playing back
NOTE
• The file name is indicated if there is no title or artist information of
the song. For WAV format files, the file name is indicated since
there is no title or artist information in the file.
• The title, artist information, and file name support half-size alpha-
bet and numbers only. Other characters are converted into “

.”
• “Recording…” appears at the location of the title while recording.
4. Press the REW or FWD button in the transport
section to select the playback song, and then
press the PLAY button.
Playback starts.
5. Adjust the sound volume of the song.
 When outputting to the STEREO bus or
MONITOR OUT
Rotate the USB IN knob to adjust the volume.

When outputting to the channel 29/30 {21/22}
Use the channel fader to adjust the volume.
NOTE
• Gain may be high for an audio file encoded from the audio
CD. As necessary, adjust the gain as follows: press the USB
button  call up the “(3/3) PARAMETER” screen  select
and adjust “PB Level.”
• Avoid adjusting both outputs at the same time because of the
delay of the signal path.
6. Press the PLAY button again.
Playback is paused.
Playing back a song from the title list
1. Press the USB button below the display
repeatedly if necessary until the USB (1/3)
PLAYER page appears.
2. Rotate or press Knob 1 to display the title list.
• When you select the line of the folder ( ) and press
Knob 1, the content of the folder appears.
• Selecting the line of and pressing Knob 1 moves to
the upper folder.
NOTE
The title list supports half-size alphabet and numbers only.
Other characters are converted into “

.”
3. Rotate Knob 1 to select a song (e), and then
press Knob 1.
Playback starts.
 Pausing, fast forwarding, or fast rewind-
ing the playback
Use the buttons in the transport section.
Pausing
Press the PLAY button during playback to pause playback. Press-
ing the PLAY button a second time resumes playback from the
stopped point. While paused, the indicator flashes.
Fast forwarding/rewinding
Holding down the REW or FWD button for at least one second
starts fast forwarding or rewinding while a song is playing.
Releasing the button resumes normal playback from that point.
Navigating through a song
Press the REW or FWD button to move a song.
• Pressing the REW button during playback moves to
the beginning of the current song or moves to the
beginning of the previous song and starts playback,
depending on the song playback position.
• Pressing the FWD button during playback moves to
the beginning of the next song and then starts play-
back.
• Pressing the REW or FWD button while the song is
stopped or paused moves to the previous or next
song.
To the upper
folder
Song
Folder