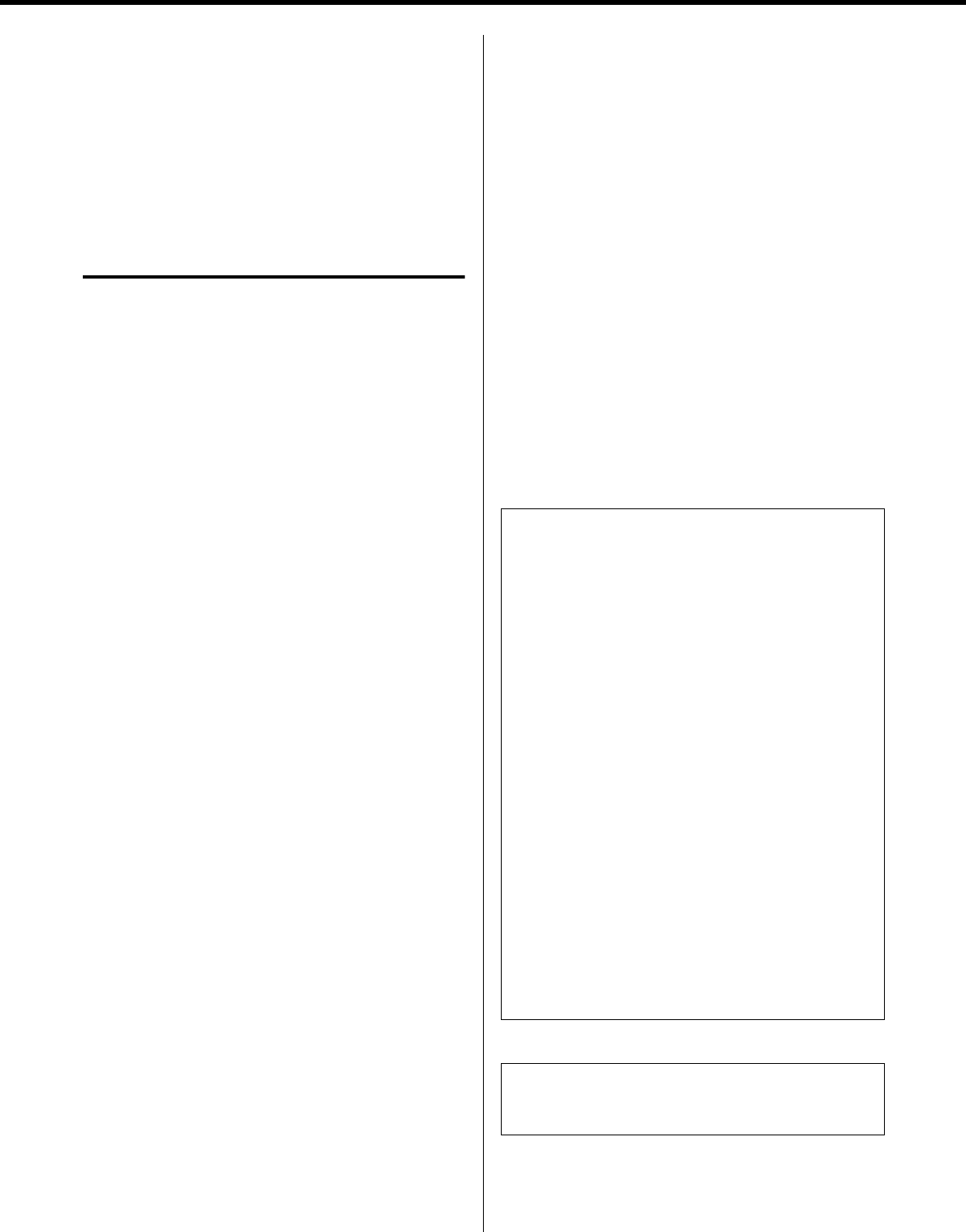 MGP32X/MGP24X Owner’s Manual
6
Introduction
Main features
D-PRE (Discrete Class-A MIC preamp)
Mono input channels are equipped with Class-A discrete micro-
phone preamplifiers. The head amplifier features an inverted Dar-
lington circuit* used in high-end audio devices, and reproduces
low frequencies with exceptionally musical characteristics as
well as sustained high frequencies. Independent toggle switching
of +48V phantom power and 26dB (pad) on each channel.
* Inverted Darlington circuit: An amplifying method for elimi-
nating the nonlinear characteristics of the amplifier element
and suppressing the distortion. The circuit features highly
musical phase characteristics.
X-pressive EQ
The shelving EQ (low/high) on the mono input channels features
Xpressive EQ, which effectively models analog EQ utilizing
Yamaha’s famed VCM (Virtual Circuitry Modeling) technology.
We analyzed vintage EQ analog circuits and redesigned the tech-
nology specifically for the MGP to create an EQ with exception-
ally musical characteristics. Furthermore, the cutoff frequency
can also be adjusted, enhancing use of the EQ in sound reinforce-
ment applications, and extending the sonic control range of the
mixer.
USB device recorder
A USB device recorder is built into the mixer for recording mixed
audio to a USB device as an audio file, and for playing back
music saved in the USB device by assigning it to the desired
channel output or bus output. Supported file formats are MP3
(MPEG-1 Audio Layer-3) and WAV for recording and MP3,
WAV, and AAC for playback.
Stereo master – COMP and GEQ
The stereo master is equipped with a compressor (COMP) or
multiband compressor that adjusts the sound pressure of the out-
put signal, and with a graphic equalizer (GEQ) that adjusts sound
quality such as feedback.
Digital effects — REV-X and SPX
Two powerful digital effect blocks are built into the mixer: REV-
X (8 types) and SPX (16 types). REV-X gives you a high-density,
richly reverberant sound ambience, with smooth attenuation,
spread and depth that work together to enhance the original
sound. The versatile SPX block features a variety of effect appli-
cations, such as reverb, delay, and modulation effects, along with
complex combinations of multiple effects.
Convenient, practical functions for events –
Ducker, Leveler, and Stereo Image
The mixer features three exceptionally convenient features for the
stereo input channels: Ducker, Leveler and Stereo Image. The
ducker function automatically lowers the level of background
music to accommodate the voice of an announcer coming in on
another channel. The leveler function automatically maintains a
consistent sound volume, even when using sound sources that
have different mastering levels. Stereo image narrows the pan
balance of the stereo sound source, and changes stereo signals to
mono. This is useful in restaurants and other spaces where the left
and right speakers are distantly positioned, or when you input
accompaniment sound to the left channel and vocal sound to the
right and want a more natural stereo image.
USB port for playing and charging your iPod/
iPhone
Digital audio output from the iPod/iPhone can be directly input to
the unit, and the iPod/iPhone can be charged while connected.
About the models
The MGP32X and MGP24X feature a different number of mon-
aural input channels and COMP control knobs. The MGP32X has
24 monaural input channels and the MGP24X has 16. The
MGP32X is equipped with 16 COMP control knobs for channels
9-24 and the MGP24X with 8 COMP control knobs for channels
9-16.
Conventions in this manual
• Whenever there is a different number of channels or a different
channel number for the same function between the MGP32X
and the MGP24X, the number that applies only to the MGP24X
model is enclosed in curly brackets { }. For example, “CH1-24
{CH1-16}” means channels 1-24 for the MGP32X and chan-
nels 1-16 for the MGP24X.
* “CH” is an abbreviation for channel.
• Control knobs on the panel are called “knobs.” Some knobs
rotate from a minimum value to a maximum value, while others
rotate endlessly.
MGP Editor
MGP Editor is a free software application that gives you addi-
tional control of your MGP mixer’s DSP settings via your iPhone,
iPod touch, and iPad. See the following web site to download the
application.
http://www.yamahaproaudio.com/global/en/products/periph-
erals/applications/mgp_editor/
Included Accessories
• AC Power Cord
• Owner’s manual (this book)
Thank you for purchasing the Yamaha MGP32X/MGP24X
mixing console.
Please read this manual thoroughly to make the best use of
the mixing console for the longest possible period of time.
After reading this manual, please keep it available for future
reference.